The Beginning and First Building

A small group of pioneers met in the schoolhouse on June 12, 1905 to organize the First Presbyterian Church of Wickenburg. The 8 residents who convened with a commission appointed by the Presbytery of Arizona for the purpose were: Mr. and Mrs. J.W. Etter, Henry Farnsworth, Dr. and Mrs. J.F. Jones, Mrs. W.H. Mann, William Muny, and Mrs. W.H. Smith.

For many months during Arizona's Territorial days, church was held in the schoolhouse, in the dining room of the old hotel then located near present day Center and Kerkes Streets, or in private homes. In approximately 1907, Mr. Farnsworth contributed a portion of his land at the corner of Apache and Jefferson Streets to the church. Eventually and with the help of almost every man in the community, a small one room frame building was constructed on the site. The building served the congregation as a church for more than a decade.

Of the 8 charter members, the name of Henry Farnsworth appears most frequently in church records of the early years. Not only was he a faithful contributor, but he was also a working member who, for many months before the church was organized, distributed religious literature from door to door and entertained the children of the town with Biblical stories.

Another charter member, Mrs. W.H. Smith, an African American woman who operated a hotel in town, was accepted as an equal in the beginning. But as the years passed and new people arrived in the community, her status changed. She became increasingly aware of a color line. After a few years, Mrs. Smith dropped out of the church; however, she continued contributing to its upkeep and survival as long as she lived.

Until about 1920, the first little church experienced alternating periods of upkeep and neglect, but it continued to be used by the Protestant ladies of the town. It is stated in "Forty-Five Years in Highlight, First Presbyterian Church, Wickenburg, Arizona," compiled by R. Wilson Brown in 1950 that "There were many times between 1908 and the beginning of World War II when the going was tough. Although the Board of National Missions contributed toward the upkeep of the church, there were financial reverses."

During part of this trying period, Mrs. William Deatsch was a mainstay at the church. Mrs. Deatsch, who was a schoolteacher before her marriage, is described by former members as an intelligent Christian woman who performed the duties of Sunday School Superintendent. It was after she left in 1916 that the Presbyterian Church reached its lowest ebb.

As if in answer to their prayers, Rev. William Borthwick and his wife, both missionaries to India on furlough in the US, appeared in Wickenburg in 1921. Encouraged by the arrival of the Borthwicks and new supportive members, the congregation began to seek methods for improving their neglected church. Some members wanted to enlarge and improve the old building while others felt a new structure was the answer. A representative from the Board of Missions came to Wickenburg to assist in determining the best course of action. After inspecting the old building, he recommended that a new church be constructed.

With a main goal, the congregation worked together. Townspeople contributed material and labor, and the new church soon became a reality. Before the Borthwick's departed to return to India, they participated in dedicating the new building.

In an effort to attract a minister who would remain in Wickenburg to pastor their church, the congregation began renovating the first church building to use as a manse. Again, with assistance from the community at large, the manse was completed in 1929. At that time, the church became known as the Community Presbyterian Church.

In the early 1930's, new members arrived to join the congregation. Under the sponsorship of Helen Nelson, now Mrs. Carl O. Shride, a Christian Endeavor Society was organized that encouraged young people to become a part of the church. A monthly dinner meeting, held in the basement of the church, afforded men in the community an opportunity to meet together. Mrs. Shride was among the members of the Ladies Aid who cooked and served the first dinner.

By 1939, membership had reached 125 with many friends of the church attending services on a regular basis. For the first time in its history, financial independence was enjoyed. The new building was remodeled to include a steeple and other conveniences, and upon completion, the structure was painted white. Long term members often refer affectionately to "the little white church" of those years.

The manse was reconverted back to church use to provide space for growing Sunday School classes in 1948. The need for a larger church began to be voiced. Shortly after this, primary grade Sunday School children started collecting pennies for the new church. Between July and December 1948, they dropped a total of $15.32 into a small bank. Those pennies marked the beginning of the building fund that was eventually used to construct the present Presbyterian Church at 179 North Adams Street.

When Dr. Charles S. Poling arrived to serve as pastor in 1951, the larger church was still a dream. In 1952, a building committee was appointed and pledges were received from members and friends for the new structure.

The site for the present church was purchased in June 1953, but before construction could begin, the area required extensive work. To level the irregular terrain, retaining walls were needed on the southern and eastern boundaries. Members of the congregation were once again called upon to work together toward that goal.

One team solicited cement for the wall. The objective was at least one sack of cement from each family in Wickenburg. Members still recall the success of Mrs. Russell (Annie) Stone whose contribution to this cause was so overwhelming that she was later honored in a coronation ceremony and dubbed "Cement Annie."

Throughout the summer, as required, another team of men loaded and hauled boulders to the church site in a borrowed truck. There, a group of men moved the boulders to the mason. Work began at daylight and continued until midday heat became unbearable. The ladies were often on the scene, preparing campfire breakfasts for working crews.

The cement was collected. Rocks were hauled. A small mixer was used to prepare the cement which was then trundled in wheelbarrows to the construction site and troweled into place. Stones were set by hand. When the retaining walls were completed, the site was filled in and the lots leveled.

"I think I speak for everyone who took part in the project when I say that was the hottest summer I can remember," reminisced Ewald Stein who was a member of the boulder hauling team. "I think each would agree, too, that it was one of the most rewarding summers in our lives."

In 1953, the congregation moved on Sunday morning in procession to the beautiful new church building one block north of the "little white church." This new building was built mainly with volunteers and volunteer finances. It is truly a beautiful edifice and dedicated to the glory of God. 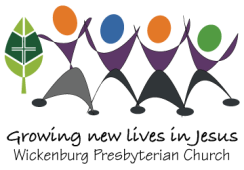